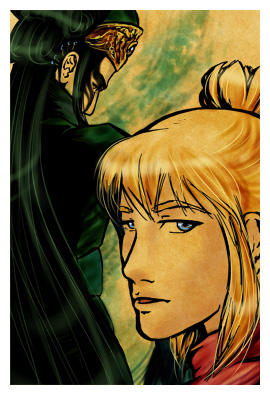 is an ongoing project by Irk, a transgender man, who does writing and art for the project. Currently, it consists of the completed first trilogy (Book One A Token-Box With Which to Buy a Soul, Book Two The Buzzards That Circle The Throne, and Book Three The Souls That Pass Through the Void), the first book of the sequel White Thaumist trilogy, Awakening at Midnight; as well as several miniseries and shorts.

The series is on hiatus while Book One is undergoing editing, the Book One print edition is currently running as a Kickstarter

''The enigmatic Peacock King, ruler of half of the known world, seeks to possess the land itself by enslaving the spirits of the wild. Gerald, a newly initiated Poet whose magic is as real as he can write it, is also one of the Armed — enforcers of the Law who wield guns with souls. His mission: infiltrate the Peacock King's Court and gather intelligence. Unfortunately for Gerald, things quickly go awry...

Can he outwit the Peacock King? Will he be able to save his long-lost brother, who is the King's new spirit-tamer?''