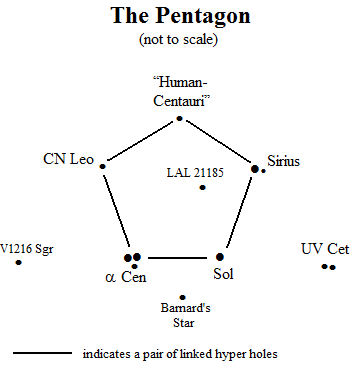 Probably not The Pentagon you had in mind.
Advertisement:

about a "realistic" space war between five star systems. Since hyperspace corridors connected each of the five systems to its two closest neighbors, forming a crude pentagon shape in space, the story is titled The Pentagon War.

In the years that followed, a hex-map-based war game

grew out of it, as did an entire astronomy website

to answer the question "how far is it from star X to star Y?". And in September of 2009, nearly 30 years after writing the first draft, the story began getting turned into a novel.

With the exception of the technology behind the fusion reactors, there's not a single item used in the space battles that couldn't be realistically designed with known science today. Space is not an ocean. The spacecraft all have accurate delta-v budgets given the nature and quantity of their fusion fuel. It takes time to go from a standing start to 1% of the speed of light.note Three-and-a-half days, if you accelerate at 1g. Engagements are fought at ranges of thousands, and even millions, of kilometers. Even the Bussard ramscoop technology on the true starships takes the realistic density of the interstellar medium into account, and pays at least token homage to the drag problem.

Here's a link to the original short story,

and here is a link to the multi-chapter version

. Note: As of April 2019, only the first twelve chapters are complete, and the rest consist of partially-filled-in snippets.

No relation to The Pentagon Wars.