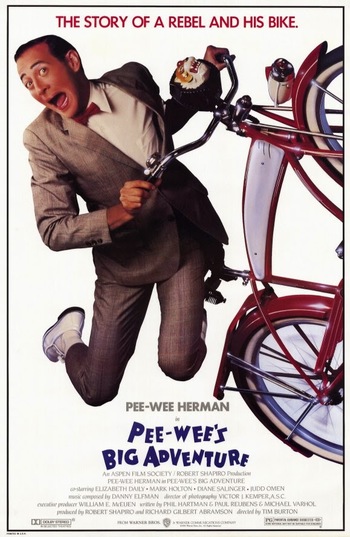 One day, Pee-wee's treasured bike is stolen by a rival Manchild. Desperate to get it back, he embarks on a cross country journey, meeting many bizarre characters along the way (and considering the sort of guy Pee-Wee Herman is, that's one hell of a mouthful).

Though ostensibly Reubens' baby, it's famously Tim Burton's feature directorial debut and then-Oingo Boingo frontman Danny Elfman's first score for a major motion picture. In fact, the three coming together was somewhat serendipitous: Burton and Reubens were huge fans of the 1980 no-budget cult film Forbidden Zone, which Elfman had scored, and their mutual love for the film not only convinced them to hire Elfman as the composer, but to base the entire film's quirky tone on it. The script was penned by Reubens and the late great Phil Hartman.

It's the Image for the Tim Burton Nightmare Fuel page for a reason. Marge's unexpected jumpscare, makes this chilling tale all the more haunting.

It's the Image for the Tim Burton Nightmare Fuel page for a reason. Marge's unexpected jumpscare, makes this chilling tale all the more haunting.