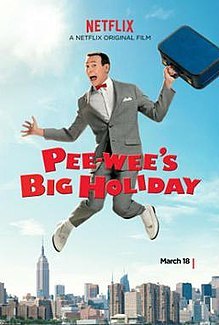 The movie begins in Fairville, with Pee-wee's band breaking up and his feeling that he's obligated to stay in his hometown, when a motorcycle riding Joe Manganiello comes into the milkshake bar and immediately hits it off with Pee-wee. After some pushing from Joe, Pee-wee goes on Holiday, and embarks in a cross-country adventure to go to Joe's birthday party, abandoning all responsibilities.

This film provides Examples of: