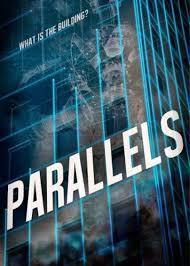 Ronan: You're saying you're from some weird alternate Earth?
Polly: Not from my point of view. You guys are the ones who are drinking coffees that look like ice cream sundaes and shit.

Bad-boy runaway Ronan Carver gets a cryptic phone call from his father, telling him to come home. There he finds his sister Beatrix, his father's go-bag, and a strange device wrapped in a newspaper declaring President Clinton has been assassinated. He and Beatrix (plus their tagalong neighbor, Harold) follow the message to an abandoned building. Inside the graffitied walls are covered in deranged messages ranging from warnings that "contagion has spread to Earth 33" or that the "natives are friendly, no weapons on Earth 168."

They soon discover that the derelict building is actually a parallel-worlds machine that transports them into a random alternate Earth. The enigmatic Polly finds them and gives them some exposition into how travellers like themselves comport themselves in strange worlds that range from the postapocalyptic to the eerily advanced. Along the way they're kidnapped by wasteland scavengers, dodge nuclear blasts by fleeing to parallel worlds, and commit identity theft against alternate versions of themselves to survive. All the while Ronan and Beatrix continue to seek their father.

Parallels was released on Netflix in March of 2015, and its success has led to the greenlighting of a series based on the premise entitled "The Building"; Neil Gaiman is involved in a creative capacity. However, it appears to be stuck in Development Hell or cancelled as nothing more has been heard about this since 2016.