Give Him a Normal Life 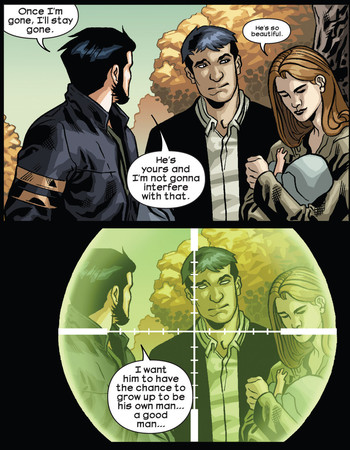 He may have claws and a healing factor, but he won't be another Wolverine.
"We tried to give you a normal life. I realize now I have no clue what that is."
— Diana to her daughter Natalie, Next to Normal
Advertisement:

Your hero has just become a mommy or a daddy — wow! Either they weren't planning on it, and they managed to admirably rise to the challenge of parenthood, or this is something they've always wanted, and having a baby is making many of their dreams come true. (Sometimes, it can be a mixture of both)

But it doesn't take long before there are problems. Having a child may have changed the hero, but it hasn't changed their life any. They still have to go out and save the world, fighting criminals or slaying monsters wherever they may roam. This kind of thing really cuts into spending quality time with the kid they wanted so much a few episodes ago, and can make them question how selfish they might be being.

There's also the inherent issue of them being a complete and total danger magnet. All those psychotic bad guys who, by virtue of existing and hating the hero, nearly destroyed the hero's love life (and perhaps continue causing dangerous hiccups in the hero's attempts at normalcy) are still out there, and couldn't care less that there's a baby in the picture now. In fact, how lucky this is for the villain that likes to attack the hero by kidnapping/torturing/killing their nearest and dearest! The hero now has someone else to lose.

Last, but never least, if the hero is supernatural or paranormal in some way, there's a good chance the baby will be just like them, with powers of his own that make them a target even without Mom or Dad's help.

Well, the hero loves their precious offspring more than anything else in the world, and couldn't bear it if anything happened to the kid, or if the kid had to live with all the stuff the hero has to every day.

"I just want to give him/her a normal life."

Being just that noble, the hero will then give their child up, to live in blissful normalcy with either ordinary foster parents or their child's normal other parent who will presumably provide the child with a life that doesn't have any supervillains.

It should be noted that despite the hero's best intentions (and presumably those of the adoptive parents), it's not unusual for the child's life to be anything but normal, especially if Super Powerful Genetics comes into play as mentioned above. (Or if the child is to grow up to be the protagonist of their own series.)

If the other parent enforces it, it's Turn Out Like His Father.

Compare It's Not You, It's My Enemies, where a hero goes through a similar process (with a similar result) with a love interest instead of a child. Related to Deliver Us from Evil for villains—many a bad gal has done a Heel–Face Turn because the kind of life she leads is one she doesn't want for the kid in question. Also related to Muggle Foster Parents when the story goes back to follow the kid. Don't Tell Mama is an inversion of sorts where a character (usually a bad guy, but sometimes a good one) keeps an uncomfortable or disturbing truth about themself or their profession from their mother, family, or True Companions so that they can live a normal life in blissful ignorance. Compare to Daddy Had a Good Reason for Abandoning You.

Alternative Title(s): Give Her A Normal Life