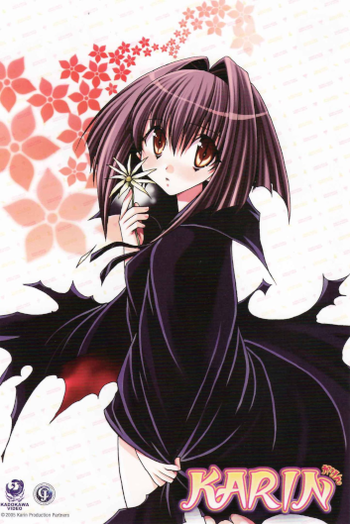 The very terrifying vampire.
"It's so embarrassing!"
Advertisement:

Karin, also known as Chibi Vampire (English title of the manga, the anime is translated using the original name) is a shounen manga created by Yuna Kagesaki. The manga ran in Monthly Dragon Age from 2003 to 2008, and it received an anime adaptation that aired from 2005 to 2006. It was also adapted into a series of Light Novels illustrated by Kagesaki and written by Tohru Kai, which were published from 2003 to 2007.

Karin Maaka is a cute, bubbly, and slightly ditzy sixteen year old girl, dealing with many of the problems faced by girls her age. Her family doesn't understand her. She's easily embarrassed. The new guy at school makes her feel funny. And she seems to have a condition related to blood that leaves her out of sorts about once a month...

OK, maybe it's not that simple, when you factor in that most of the above is related to her — and her family — being vampires.

To make it worse, Karin is a very strange little vampire. It turns out she is a "blood-maker": instead of needing to drain the blood of others, she has to inject her excess into someone. If she doesn't, it builds up and eventually, she gets a nosebleed that puts one in mind of the elevator scene from The Shining.

Karin is understandably put out by this state of affairs. She doesn't have any real special abilities to keep this under wraps, relying on her little sister to cover up any mishaps. Even in temperament, her sunny but easily flustered demeanor does not a creature of the night make. This puts her at odds with her family, who despite caring for her, call her "mutant" and "failure", and make her work to pay bills; after all, she's the only one who needs electricity or food in the house.

But she makes the most of it all, until life sends her a new delivery of trouble in the form of tall, creepy-eyed, earnest Kenta Usui, the new student. One look at Kenta and her considerable store of blood starts racing. The reason, of course, isn't hormones — it turns out that vampires have "tastes" in blood related to a certain emotional quality. Karin's mom Carrera craves the blood of liars; her father Henry, that of prideful people; and her eldest brother Ren, the blood of stressed women. Despite her condition, it turns out Karin has a taste too, and Kenta is apparently Flavour of the Month. Being around him puts her at risk of painting the town red, literally. Too bad they share a class. And a route to school. And look who just got hired on at Karin's part time job....

For all the hijinks and strange setups, Karin is a remarkably natural boy-meets-girl series. The relationship between Usui-kun and Karin is never rushed, developing smoothly from the admittedly supernatural set-up and arrangement of convenience into understandable affection. The secondary characters are generally well-rounded and, if not deep, consistent. The notably grating exception is anime-only Winner (pronounced "Weiner") Sinclair... and even he manages to pull off a little sympathy near the end.

Not to be confused with the Magical Girl series Kamichama Karin, or the character from the Dragon Ball or Naruto franchises.

Apparently, being an actual vampire doesn't help you get the part.

Example of:
Your Costume Needs Work

Apparently, being an actual vampire doesn't help you get the part.