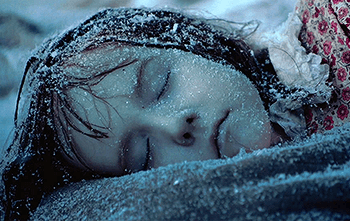 "Blondes make the best victims. They're like virgin snow that shows up the bloody footprints."
— Alfred Hitchcock

There are many ideas associated with snow: Tranquility, purity, cleanliness, beauty...

And then there's the symbolism.

As beautiful as snow is, it also signifies winter, associated with the death of the year (in the temperate latitudes at least), the death of crops, and the death of the sun. Snow also covers the world with a blanket of white, and in Eastern cultures, white is the color of death (as it was until a few hundred years ago in Slavic states as well).

Whatever the reason, using snow is a great way to portray a character on the verge of dying or a place torn by war in a very artful manner.

A sub-trope of Empathic Environment. For a different interpretation of snow, see Snow Means Love. See White Shirt of Death and Blood-Splattered Wedding Dress for a similar trope, only applied to clothing instead. May or may not be related to Grim Up North and Tragic Ice Character.

Not to be confused with Snowy Screen of Death.

As a Death Trope, several if not all spoilers on this page are unmarked.