Video Game / I Am Setsuna 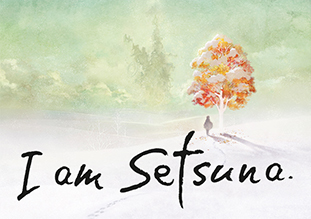 A tragedy in a land of ice and snow.
I Am Setsuna, or イケニエと雪のセツナ (A Sacrifice and Setsuna of the Snow) in Japan, is a Japanese role-playing video game developed by Tokyo RPG Factory and published by Square Enix. It was released for PlayStation 4 and PlayStation Vita in Japan in February 2016, worldwide for PlayStation 4 and Microsoft Windows in July 2016, and on the Nintendo Switch in 2017.
Advertisement:

The game begins on a snowbound island, which is regularly beset by angry demons. According to an ancient custom, a maiden is sacrificed to appease the demons. When the demons grow restless, a girl known as Setsuna is chosen as the sacrifice. Together with a taciturn mercenary named Endir, a former traveler named Aeterna, and a carefree veteran soldier named Nidr, Setsuna begins her journey to the ritual site on the edges of the known world where the sacrifice will take place.

The game takes heavy inspiration from 16 and 32 bits consoles JRPGs, most notably Chrono Trigger, Chrono Cross and Final Fantasy X. The gameplay and magic system are heavily inspired by Chrono Trigger, except you can choose which move you want to equip or not with Dual Techs and Triple Techs.

A spiritual successor, Lost Sphear, was released in 2017.

I Am Setsuna contains examples of: