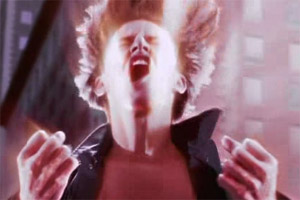 Since Power Glows, everything emits light before it blows up, often in brilliant beams that work their way out of cracks in the surface of the doomed object. Often the object bulges like a balloon being squeezed before finally blowing to pieces.

In one distinctive variant it meets the Pillar of Light in a "lighthouse meltdown" effect. Series of beams or lines of light spring out from the object, either from obvious locations, such as the eyes/mouth/other orifices for a creature, or they can simply shine randomly through the surface before it all gives up, often appear one at a time in rapid succession. The actual explosion may take the form of a giant burst of light. This is one way to depict exploding planets, usually by having lines of light crawl across the surface before the Earth-Shattering Kaboom.

May also cause a Pillar of Light. May occur before a Post-Defeat Explosion Chain. A Sub-Trope of Power Glows. Compare, contrast Disappears into Light.