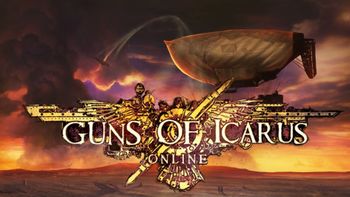 Guns of Icarus Online is the MMO sequel to Guns of Icarus, developed by Muse games. It is a co-op shooter game where teams of airships, each manned by 4 people, attempt to sink the other teams' airships.
Advertisement:

The point of the game is to keep your ship flying while dishing out pain to other ships. Six different ship bodies are in game, and come set with loadout points for light and medium guns. Each one requires a different strategy, and it takes a while to master them all.

A kickstarter has been funded for an adventure mode, and though it failed to meet some of the major goals, two expansions are planned, Co-Op, a series of PvE missions in pre-set scenarios against and AI direction, slated for 2014, and Adventure Mode, which will add a permanent overworld, and faction intelligences.