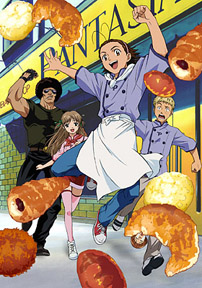 "There is English bread, German bread, and French bread, but Japan's bread — Ja-pan— does not exist. In that case, there is no choice but to create it. This story is a serious, biographical ballad of a boy who possesses Solar Hands, Kazuma Azuma, who will create a Japanese bread made by and for the Japanese people, which can be presented to the world proudly."
— Opening Narration
Advertisement:

In the world of Yakitate!! Japan, bread is Serious Business. And no one takes it more seriously than Kazuma Azuma, a teenaged baker whose dream it is to create a national bread for his native country of Japan. It's an uphill battle however, as Japan is a land where rice has always ruled and where bread has never been held in very high regard. But all that is about to change thanks to the efforts of our gastronomically savant hero, who, with his "solar hands" and ten years of self-study, has become a master of his craft.

The story begins with Kazuma heading to The Big City to apply for a position at Pantasia, one of Japan's biggest bakery franchises. Unfortunately, once he gets there he finds himself having to compete for the job with about thirty other applicants, most of whom have had some sort of formal training and education. Will a young, naive boy with pluck and determination be able to measure up in a Cooking Duel against Japan's finest up-and-coming bread makers?

During the course of the show, Kazuma gets to strut his stuff in several baking tournament arcs, as well as meet a cast of wacky characters, including:

Yakitate!! Japan is notable for being a parody of the shonen fighting anime genre, skewering many of the traditional shonen character archetypes, and the overblown way in which even the most mundane turns of the plot are depicted. It's a fun—and at times, educational—action series. Watch it, and you'll never again think bread is boring. A follow-up sequel, Yakitate!! Japan Super Real started in 2019, 12 years after the series ended.