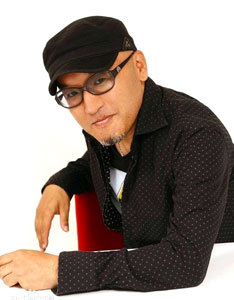 Well, not literally, but if there's one thing Fumihiko Tachiki (born April 29, 1961 in Nagasaki Prefecture, Japan) is known for, it's him being the seiyuu of many guys who give out the vibe that father figures are scary, evil, etc. However, while doing that, he also has an extremely manly, coarse and badass voice, making him quite the fan favorite. Sometimes, he just does the second part (not being a father, but still a badass), or he can subvert it at one point when he's picked as the eternal Plucky Comic Relief character Boss in Mazinkaiser, and a young character at that! He's also known for providing narration and announcements for a number of projects, such as Gintama, Kamen Rider Double, Sonic Colors, and Persona 4: Arena.

He first made himself known through the smash hit Neon Genesis Evangelion as Gendo Ikari, but it wasn't quite until either Tales of Symphonia or Bleach that his popularity started to skyrocket.