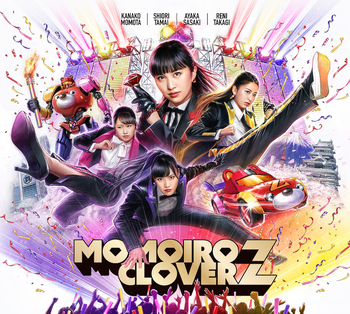 "We are the idols you can meet right now! The weekend heroines, Momoiro Cloveeer... Z!"
Advertisement:

Momoiro Clover Z is an idol group consisting of four members formed on May 17, 2008 under the agency Stardust Promotion, originally named Momoiro Clover and started with various member formations until they finally came up with 6 girls in their major debut. The group is noted for their colour assigned system for each member, super energetic performances, and their attempt to break the cute image of idols.

Basically, this idol group concept is a big Take That! to the idol culture in Japan; they dance like crazy and have some unusual choreography, such as doing handsprings, cartwheels and awesome jumps instead of lighthearted cute dances, wear strange and often ridiculous costumes ranging from Sentai outfits to wrestling masks, shamelessly do some strange routines on TV (the komanechi dance and weird faces among others), and continually do homages to other forms of subculture such as Professional Wrestling, 80's Sketch Comedy, and Toku.

As a result, they've gained attention and gradual popularity because of their uniqueness. Beginning as Street Performers in Yoyogi Park

, they finally got a major debut in 2010 after releasing two indie singles. After their sub-leader's departure in April 2011, the group changed its name to Momoiro Clover Z. Now, their singles have topped the Japanese music charts, they've released three albums, and they have performed in various prestigious music venues in Japan such as Nippon Budokan, Yokohama Arena, Saitama Super Arena, Nissan Stadium, National Olympic Stadium and have also done overseas performances in Germany, France and Malaysia. In 2013, a survey showed that the group currently attracted the highest interest level of all the female idol groups in Japan. The group currently holding the banner for Stardust Idols under the name 3Bjunior (named after their agency section for junior talents), consist of their little sister groups: Shiritsu Ebisu Chugaku, Team Syachihoko, and Takoyaki Rainbow.

The members can be easily distinguished by their Power Ranger-like colours (Red, Yellow, Pink, and ... Purple?) and their unique 3-minute introduction lines. They are as follows:

Their ex-members are the following:

Their ex-members at the time during pre-debut formation include Miyu Wagawa, Manami Ikura, Tsukina Takai (went on to SKE48 and has since graduated), Sumire Fujishiro, Yumikawa Runa and Kashiwa Yukina (who later joined Nogizaka46, but has since graduated).

They have a character sheet. You can look up their complete discography on the other wiki