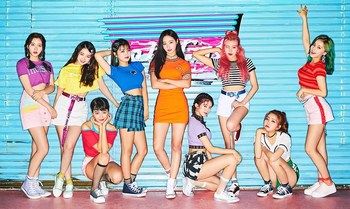 MOMOLAND is a South Korean Girl Group formed by Dublekick Company (now MLD Entertainment) through the reality show 'Finding Momoland'. The group debuted in 2016 with 7 members - Hyebin, Yeonwoo, Jane, Nayun, JooE, Ahin, and Nancy - with the mini album 'Welcome to MOMOLAND'. In 2017, Daisy, a contestant of 'Finding Momoland', and Taeha (a contestant of Produce 101) were added to the group.

In February of 2019, it was announced that Daisy and IKON's Yunhyeong were dating

In the summer of 2019, fans suspected Yeonwoo was getting ready to leave the group

, although the company denied this. However, in late 2019 it was announced that she and Taeha had left the group

At the same time, although the company said they were attempting to negotiate with Daisy regarding her future in the group, she released

claiming that the company had been blocking her from promoting and insinuated Finding Momoland was rigged. At the same time, Daisy's mother made ambiguous posts to Instagram

insinuating Daisy had been bullied by the other members, although she later deleted her account entirely. The company issued a statement in reply that refuted all her claims

, saying that it was Daisy and her mother who had demanded her removal from the group, the competition was not rigged, the time she claimed she was "not allowed to promote" with the group was a time when Momoland didn't actually have any promotions and finally, that they had offered Daisy the chance to return to work, and she ignored all messages from the company. It was eventually confirmed in mid May of 2020 that Daisy had departed from the group, but would be remaining with MLD Entertainment.

that seemed to hint that she had been forced to leave the group, but shortly after issued a clarification post denying that she had meant anything by it and apologized for "unnecessarily causing concern". In March of 2021, rumours began to spread that she had in fact been bullied or forced out of the group, following her sharing a photo on Instagram

of a page of a book that read "[subject] hated me and also held such a grudge against me", causing fans to comment on how suspicious the circumstances of her departure had been, plus her earlier posts that had seemingly implied her leaving was not her choice.

Daisy her unpaid earnings of $66,345 USD, saying "[unless] otherwise specified, the contract is effective from the date on which it is established. The phrase ‘before debut’ in the contract means that it begins from the date of signing the exclusive contract. There’s no clear evidence to say it’s a practice in the entertainment industry." The courts also ruled that the company must pay Daisy another $10,882 USD, but did not side with her on her additional damage claim of $8,371 USD. MLD Entertainment has filed an appeal against this, and as of 2022 it has not been resolved. In July of 2022, Daisy posted to her Tiktok once again saying she had been fired from the group

and she still didn't know why, and she hadn't spoken to any of the other members

and joined 9ato Entertainment as an actress.