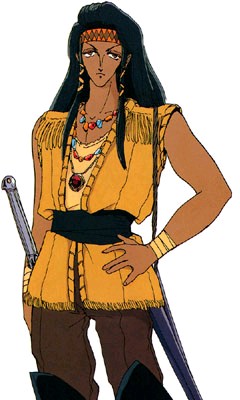 Allen Braford was born lightyears from the nearest reservation.
Advertisement:

The Stock Costume Traits for Native Americans portrayed in the pre-modern age and, all too often, modern days. Typical traits of the uniform include:

While aspects of these outfits are Truth in Television for some tribes, some of the time,note Large amounts of beading and jewelry for example is reserved for special occasions. North America is a big place, with a great deal of variation between Native cultures. Plus these aspects are occasionally applied to Native cultures outside of the US, leading to confusion as to why indigenous people in Peru are wearing buckskin. But since most writers can't be bothered with research, the common portrayal fails to capture this wide variety. Many tribes' traditional outfits look nothing like the stereotype.

Another form of this is when Native American tribes are shown doing things and using stuff that belongs to a myriad of different tribes — an example of this being Disney's Peter Pan film, which juxtaposes tipis (Great Plains tribes) and totem poles (Pacific Northwest coastal tribes). In reality, this is as jarring and inaccurate to a more learned viewer as portraying Vikings with Grecian temples.

The cover of just about any Romance Novel featuring frontier-types will conveniently feature long, flowing hair with beads and fringed leather jerkins bare at the breast.

Stereotypical characters who wear this outfit include the Magical Native American and The Savage Indian. Compare Culture Equals Costume. Related to Hollywood Natives and Tonto Talk.