You may be looking for the 2017 game Prey, by Arkane Studios. 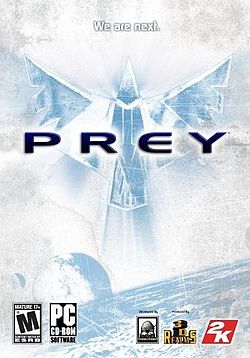 In 1995, 3D Realms announced a First-Person Shooter called Prey, to be released in 1998, about Tommy, a troubled young Native American who is abducted by aliens, gets loose in their giant organic spaceship, and must tap into his spiritual powers to rescue his girlfriend. The big selling point of the game was portals; the ability to create rifts in space between any two points of a level (Sound familiar? We thought so).

The 1997 build impressed all and sundry, but there were technical problems with the game which ultimately forced the project back to the drawing board. Like 3D Realms' other highly-touted project, Duke Nukem Forever, it languished in Development Hell for ages. Eleven years after its initial announcement, Prey finally made its way onto shelves.

The game came out in 2006, with the story largely unchanged. It boasted top-of-the-line visual effects using a modified Doom 3 engine, and no fewer than four breakthroughs in gameplay. The first was the portal system, which was less interactive than the original concept promised, but nonetheless impressive. The other three were Wall Walking, whereby gravity walkways and gravity switches allowed the player to walk on walls and ceilings; Spirit Walking, in which the lead character's spirit can leave his body and sneak up on enemies, walk through force fields, etc.; and perhaps most original, Death Walking, where dying didn't set the player back, but rather sent him to a sort of mini-game afterlife where you shoot spiritual eagles to determine how much health and spirit you have when you rematerialise right back where you died.

The game was generally regarded as an enjoyable and groundbreaking game, although there were naysayers — some complained that the game was too short, others that it was too repetitive, others that its innovations were only window-dressing for an otherwise cookie-cutter FPS. Either way, it was neither the commercial success nor the industry-changing revolution that had been hoped for.

There was also a comic

from the minds at Penny Arcade.

As a technical note, the portalling technology used to such great effect is actually a fairly old bit of behind-the-scenes level-building machinery. It normally goes completely unnoticed by the player, stitching separate areas of a game map (say, the inside and outside of a building) into a convincing whole. That it was only used as an explicit bit of mind-bending in a fistful of multiplayer maps until Prey came along is a mystery for the ages.

A sequel had been announced for release in 2012, was pushed back to 2013, then not brought up again until late 2014. The game's protagonist was to be Killian Samuels, an air marshal who was on a plane that happened to be abducted by the same exact light that takes Tommy. He was to wake up on an alien world named Exodus several years later, knowing that he somehow managed to become a bounty hunter during that period but has no other memories of that time. He would have convinced himself he was was the only human on Exodus... until he was to run into Tommy, who apparently knew him. The game was to feature an open world environment, and the ability to take on bounty hunting missions for cash. Unfortunately, in October 2014, Bethesda officially announced the project was cancelled.

The series would ultimately get a reboot in 2017 by Arkane Studios, though outside of the basic premise of being trapped on an alien spaceship, it's effectively In Name Only.