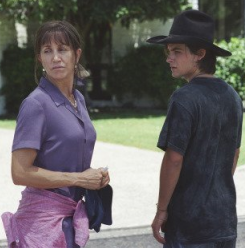 "After my operation, not even a gynecologist could tell there's anything out of the ordinary with my body. I will be a woman."
— Bree Osbourne
Advertisement:

Bree Osbourne is a trans woman who will soon receive gender affirming surgery. However, she soon discovers that she has a son named Toby. Her psychiatrist, upon hearing of this, refuses to grant her consent for the surgery and forces her to connect to Toby. Thus begins a rather interesting road trip from Los Angeles to New York and back again.

Although some consider it to be decent film in its own right, many people in the transgender community accuse the film of being stereotypical about its portrayal of transgender people; so if you don't know much about trans people, you should be cautious about watching this. Like with many things in Hollywood, any portrayal at all of social, ethnic and gender minorities is a big step up from the recognition transgender people usually get in the media, which is to say, "none at all". Especially true for this film as it came out in 2005, where discussions about gender expression in media such as films wasn't exactly mainstream.