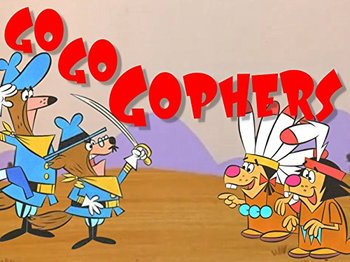 Go Go Gophers was an animated western comedy series created by Total Television. It started as a side segment of The Underdog Show on CBS in 1966 and consisted of 48 episodes, each about 4 and a half minutes long (5 if you count the opening sequence.) This segment was so popular that from 1968 to 1969 it was its own show on CBS, and only consisting of reruns of all 48 episodes.

In this series, Colonel Kit Coyote and Sergeant Okey Homa (both being coyotes) try to claim the western town Gopher Gulch for the U.S. calvary, but their attempts are undermined by Chief Running Board and Ruffled Feather. These two gophers are the only tribe members to still live on their native land, as the rest of the tribe was moved to a reservation up north due to the increase of settlers moving to Gopher Gulch.

The premise of the episodes often had the same formula. The coyotes would discuss the colonel's latest plan to get rid of the Gopher Indians, never knowing that Ruffled Feather would secretly find out the scheme. Ruffled Feather would rush back to the Gophers' tepee and report his news to his best friend/housemate Running Board, and would always come up with a plan to thwart the coyotes. Using Ruffled Feather's ideas, the gophers would prevail against their rivals and stay one step ahead.

One recurring gag throughout the show is that Okey Homa would try to warn Kit Coyote with any suspicions the sergeant has when they try to stop the gophers. However, Kit often ignores Okey's warnings, which is one of the reasons why the coyotes fail to get rid of the Gopher Indians. Another running gag in the show is that during exchanges of dialogue Ruffled Feather would speak in his native language and someone who doesn't understand him (usually the colonel) would ask Running Board, "What did he say?" Running Board would then translate his friend's statements into English.

Besides the four main characters, there were two recurring characters who each appeared in a few episodes. The first was Colonel Coyote's human boss, General Nuisance, who sometimes visited the fort to work with the cavalry to stop the Gopher Indians. When the gophers thwarted the cavalry, the general would get angry with the coyotes and lock them in the guardhouse as punishment for their failure. The other recurring character was Corporal Crimp, a coyote who tried to help the colonel stop the gophers, only for them to turn the tables on him, landing Crimp in trouble with Colonel Coyote.