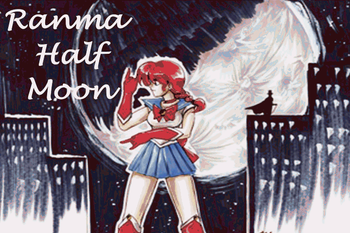 A "fuku fic" is a specific subtype of Ranma ½ fan work that centers around Ranma Saotome wearing an embellished Sailor Fuku costume, akin to the ones worn in Sailor Moon. Because of this specific convention, fuku fics often (but not always) include Ranma ½/ Sailor Moon crossovers in which girl-form Ranma becomes a member of the Sailor Senshi, or otherwise takes up the role of Magical Girl.
Advertisement:

This variety of fic was particularly prominent during the '90s, as these were the two most prominent Shōjo and Shōnen series at the time; it still remains surprisingly popular.

If you want the other kind of Fuku Fic, the one that actually takes place in school and doesn't have anything to do with Ranma or Sailor Moon in some cases, check High School AU.

Please do not add examples; this page is Definition-Only and merely defines and explains the term.