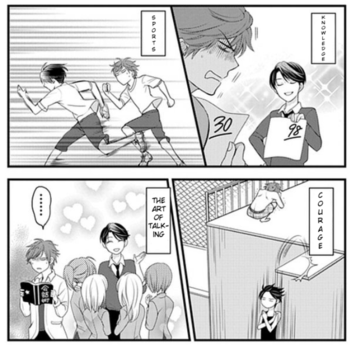 Maybe it's to illustrate one of our heroes' quick wit or smarts. Maybe it's to remind the viewer that the character isn't entirely a loser. Or perhaps the writers just love them.

Whatever the reason, many shows create a one-sided rivalry between two contrasting characters. Character A, usually part of the main cast, almost always wins. Character B may score some victories in the conflict, but by the time the credits roll, character A will have outdone B in such a way that there's no response to it. Sometimes, just to add salt to the wound, Character A may reveal they never even considered Character B to be a rival at all.

A particular kind of interaction between Sitcom Arch-Nemeses. Related to Curb-Stomp Battle, but usually much less violent. If the constant loser is a recurring villain, not another main character, then this overlaps with The Good Guys Always Win. Compare Mutually Unequal Relationship.

See A Taste of Defeat (for all cases) and Team Rocket Wins (for villainous cases) if the victorious character's winning streak is finally broken for once.

JP has his rival be easily beaten by the main hero every time, to the disdain of Inner Critic.

JP has his rival be easily beaten by the main hero every time, to the disdain of Inner Critic.