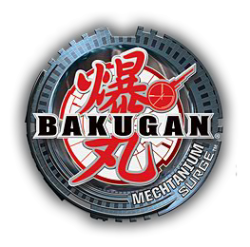 The conclusive arc of Bakugan.
Advertisement:

Bakugan Battle Brawlers is the story of six children who find Bakugan, which are these spherical toy-like things that transform into Mons, and must save the Bakugan's world, Vestroia. Some of these have their own spirits and are able to speak—all of the main characters, and most of the supporting cast, have one of these.

All and all, Bakugan could be seen as a combination of many different popular series. It is in varying parts reminiscent of Digimon (the whole "save both worlds" thing— it probably skews closest to Tamers in concept if not in tone), Yu-Gi-Oh! (the sentient Bakugan are somewhat like the spirit monsters in GX, and the game is played with cards), Pokémon (in that Pokémon was one of the first "mon" series and this series features battling monsters contained in spherical devices), and Beyblade (Merchandise-Driven). There is one notable difference from these series, and that is that the non-human characters are able to talk while in ball form. (Go ahead, there's no instance where a Pokémon ever talks to its trainer while inside a Poké Ball.)

Spin Master first made reference to a Western reboot of the Franchise in their 2015 Q3 financial report,

note which also featured a blurry, tentative concept for the lead and a Bakugan then later went mum for a good couple of years before a trademark was filed late in 2017. Bakugan: Battle Planet is the name for the seemingly more straightforward Bakugan reboot.note See the page's references for details. According to a couple more

Not to be confused with Bakuman。. Or Byakugan. Or even Bakuon!!* which, coincidentally, is also a TMS Entertainment property

Prior the start of the series, Mira was just an average Vestal citizen, viewing the Bakugan nothing more than unintelligent pets. However, this all changed one day, when she heard Hydranoid speaking while her father conducted painful experiments on him. No longer willing to participate in the enslavement of another sapient species, she formed the Bakugan Resistance to fight for their freedom.

Example of:
Defector from Decadence

Prior the start of the series, Mira was just an average Vestal citizen, viewing the Bakugan nothing more than unintelligent pets. However, this all changed one day, when she heard Hydranoid speaking while her father conducted painful experiments on him. No longer willing to participate in the enslavement of another sapient species, she formed the Bakugan Resistance to fight for their freedom.