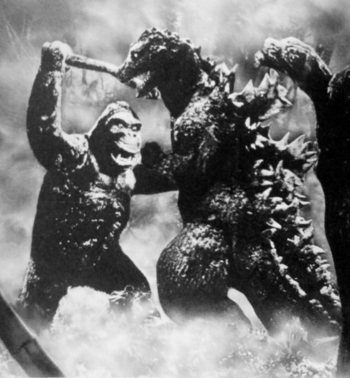 It's fur vs. fang in the ultimate evolutionary grudge match!
Advertisement:

Ever since King Kong brawled against several prehistoric monsters in his 1933 debut, and later on against Godzilla in King Kong vs. Godzilla — pretty much cementing the two in pop culture as the iconic battling kaiju — filmmakers (and other creators) have found the image of a giant ape (or a primate-like creature) fighting a giant reptile too iconic, symbolic, and just plain awesome to resist. As a result, dozens of homages to the scene have sprung up over the years, as well as variations on its imagery and themes.

The primate may be a giant ape, a protohuman, or an ogre, a giant, a cyclops or other humanoid monster with ape-like features, whilst the reptile may be a dragon, a dinosaur, or a giant snake/lizard/crocodile/turtle.

The primate will use its fists, its intellect and the occasional Improvised Weapon, whilst the reptile will use its teeth, claws, and brute strength; if venom, constriction and/or fiery breath are available, those will be used too. Expect the reptile to have the size advantage, too.

Symbolically, the trope works because the primate is automatically more relatable, therefore more sympathetic, than the more repulsive reptilian monster (because Most Writers Are Human and Reptiles Are Abhorrent).

When the opponent is a dinosaur, it works as a Clash of Evolutionary Levels — the more "modern" primate fighting and more often than not defeating the more "primitive" dinosaur calls back to the mammals' supplanting of reptiles as the dominant animal class on Earth following the K-T extinction, to which humanity owes its existence. The inverse to this point-of-view is that the dinosaurs are an "elder race" that is stronger, wiser, more advanced, firmly established, and much more accomplished than the primates who are a "younger race" and thus largely unequal and inferior to the dinosaurs as a civilization and species.

A clear subtrope of Behemoth Battle. The giant ape is generally a King Kong Copy; however, that's not always true. Similarly, the giant reptile is often a Notzilla or a T. Rexpy, if it's not based on a real dinosaur. Compare Spinosaurus Versus T. rex, a trope inspired by another famous movie fight involving a T. rex.

On a side note, it should be noted that, while Homo sapiens is indeed a member of the primate family, this trope relates to non-human primates, so the numerous works such as Anaconda, Lake Placid, and the like that feature average (or super) humans battling snakes, crocodiles, Velociraptors etc. don't apply here. Similarly, birds are technically classified as reptiles, being dinosaurs and all, but this trope only refers to reptiles in the traditional "scaly" sense, so works with primates battling birds and feathered non-avian dinosaurs also don't apply here.