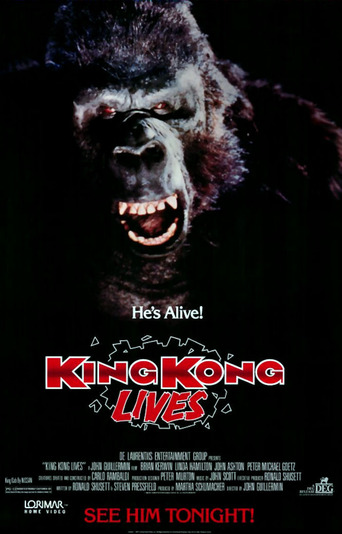 A sequel to the 1976 remake of King Kong, released in 1986. As with its predecessor, it was directed by John Guillermin and produced by Dino De Laurentiis.

Despite being riddled with bullets and falling over 1,000 feet from the World Trade Center, Kong survived his New York City rampage, but ten years later resides in a coma at a Georgia university. Thanks to the efforts of Dr. Franklin (Linda Hamilton), he is restored with an artificial heart and a blood transfusion from a female Kong, recently discovered by adventurer Hank Mitchell (Brian Kerwin) in the wilds of Borneo.

Kong and the female Kong are immediately drawn to each other when the former wakes up, and break away from their keepers to the wild. The U.S. Army, led by Lt. Col. R.T. Nevitt (John Ashton), is then sent to capture them. Dr. Franklin and Mitchell are on the side of the apes and strive to find a safe place for them to live, but as more and more humans pursue them, how long can the apes hold out — especially when one of them has an artificial heart?

There were also two Japan-only licensed games based on it, both released by Konami.