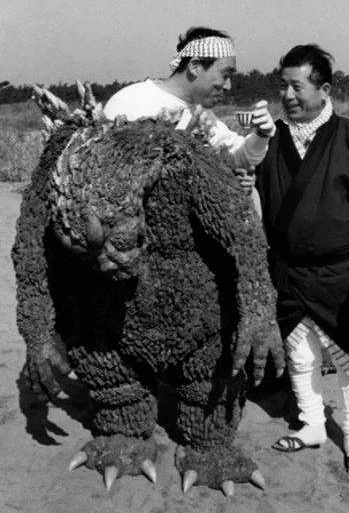 Monsters played by humans in costumes.

This is the single most important special effect of all time, bar none. The man in rubber suit technique was Hollywood's original go-to method (and still utilized extensively in Toku) for portraying the Kaiju, the extra-terrestrial invader, the experiment Gone Horribly Wrong, and the supernatural terror before computer generated effects were a twinkle in a programmer's eye. This is not to say that the method is perfect — many a great riff has been made at the expense of the weaker displays of this technique — but even at its lowest the man-in-suit still takes notoriety in the form of Narm Charm. Some special effects artists, such as Rick Baker, built their entire career on this.

Note: Not necessarily made from rubber.

Compare Pantomime Animal, Rubber-Forehead Aliens. Starring Special Effects is a sister trope for animated or puppet creations in live-action films, and it's possible for both tropes to be featured in one movie. Not related to Dressed All in Rubber. In-universe examples, if resembling a real animal, can qualify as Animal Disguise. Serkis Folk can be considered the modern descendant, with the main difference being that the "suit" is added in digital post-production. Also compare Stop Motion, the other main method of animating monsters before CGI became commonplace.