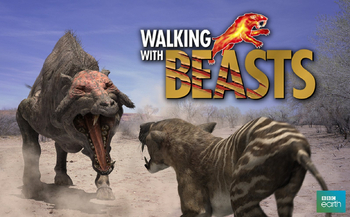 Walking with Beasts is the 2001 spinoff of the Speculative Documentary series, Walking with Dinosaurs. Following the mass extinction that wiped out the dinosaurs 65 million years ago, Beasts focuses on life during the Cenozoic Era, as mammals evolve to fill in the new niches left behind by their Mesozoic counterparts.

Like in WWD, six episodes were made, each focusing on different time periods and ecosystems under a chronological criterium.