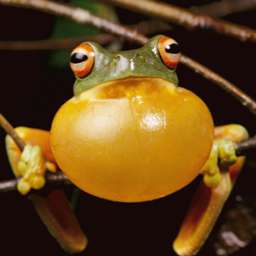 In fiction, animals are pretty loud. Dogs bark, birds chirp, snakes hiss, and so on; exactly where, when, and how you'd expect...

Thing is, an animal in that situation probably wouldn't make that noise... or any noise at all.

Cats tend to be quiet unless they want something, and the same goes for horses and dogs unless they are excited by something. Rats and mice rarely make human-audible noises. Owls only hoot to announce they've claimed such and such a spot and the same generally goes for every bird's song, every canine's howl, and so on. An animal who has been hurt in all likelihood will not react vocally at all, except for maybe one brief yelp at the moment of injury — it's not smart to announce to every predator in the area that you're an easy meal. And all the fictional predators who let out a blood-curdling roar/scream/whatever as they stalk their prey are idiots, because the whole point of a roar is to announce your presence, intimidate whatever is in front of you, and hope it'll run away. Do that while hunting and you're bound to lose your lunch.

And that's not counting the fictionary tendency for everything to roar. Say your hero is being attacked by something non-human and possibly even outside the animal kingdom; a plant or a robot or something. But we still know it's angry and very dangerous. Why? Because the thing is roaring as it fights. It might also scream in pain if the hero manages to fight back. Man Eating Plants, despite lacking in the vocal cord--or lung--department, will roar, scream and hiss just in case you didn't know they were dangerous. In a similarly helpful manner Giant Spiders and Big Creepy-Crawlies scream or hiss and there are at least two documented cases (in fiction, of course) of roaring sharks. And if you've got to fight a robot that looks like a particular animal, you can be damn well certain that robot will make the sounds of that animal.

The trope title comes from any and all cases of ambient "jungle sounds" dubbed over scenes set out in the Wild. The funny thing about this is that one of the appealing things about visiting wild places is how quiet they tend to be, especially during the daytime. The forest only tends to be interesting, sound-wise, at night (and even then, it's relatively speaking) or during a short period in spring when all the songbirds are staking out their nesting spots. Visit in winter and you'll usually "hear" eerie silence.

Super-Trope to Noisy Duck. May disrupt Suspension of Disbelief for tropers who know their stuff about animals. Not to be confused with Cute, but Cacophonic. Noisy forests also tend to be places where everything is trying to kill you. See also Misplaced Wildlife, All Animals Are Dogs, Jungles Sound Like Kookaburras, Bug Buzz, Silly Animal Sound, and Incorrect Animal Noise. Use of Stock Sound Effects is a common culprit. Possibly related to Small Reference Pools.

Then again, possibly the best reason to use this trope is for our heroes to suddenly realize that it has suddenly gotten quiet.