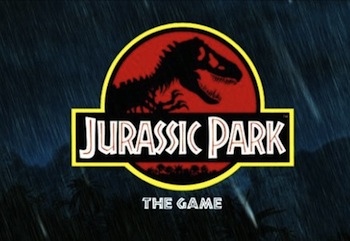 Return to Isla Nublar
What the hell kind of zoo is this?!
— Nima Cruz
Advertisement:

Jurassic Park: The Game is a 2011 video game from Telltale Games in the style of games like Heavy Rain taking place in the Jurassic Park universe. It plays like an Interactive Movie, as you don't actually control your character - rather, you guide them through quick-time events during the action scenes. During the puzzle/exploration scenes, you can look around for points of interest, switch between characters/locations, and talk through dialogue trees.

The events of the game itself are set during and right after the events of the first film, following head veterinarian Dr. Gerald "Gerry" Harding, his daughter Jess, and several mercenaries as they attempt to escape the island. Notably, the lost Barbasol can filled with dinosaur embryos is a major plot point.

The game received mixed reviews, with the phrase "Like Heavy Rain with dinosaurs," being used as both a positive and a negative description.

Has been confirmed as being partially canon: although the events of the game do not fit well into the established canon of later sequels in the franchise, Colin Trevorrownote Creative head of the franchise and the director of Jurassic World and its second sequel has stated that some version of this game's events happened in the movie canon, as reflected by the name Mt. Sibo in Jurassic World: Fallen Kingdom and that film's viral marketing.