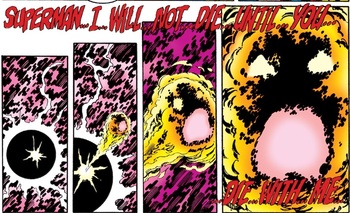 A Last Villain Stand is where the villain has lost his army (if he had one), his plan has been ruined, and he decides to fight the heroes on his own. Usually, he uses Applied Phlebotinum or a Plot Coupon to take on a One-Winged Angel form (or at least grow to giant size) and becomes more powerful than ever before.

Usually, this is a desperate play by the villain when he has nothing left to lose, has gone through a Villainous Breakdown, and all that he's driven by now is a mad thirst for revenge for the heroes thwarting his plans to rule the world, the universe, or whatever he was after. He may take things to such an extreme that he doesn't care what happens to him as long as he destroys the good guys. Also, he may be deluding himself with the thought that it's not all over and that he will win somehow and may even tell it to his enemies, even when it's impossible to see how the tide can turn now. It usually ends with the villain being destroyed and the heroes coming out alive.

There are some cases where this trope is inverted when the villain is a One-Man Army, his one man stand is not so desperate and he's still able to carry out his diabolical plans on his own. If this is the case, the villain is usually defeated when a miracle happens and the heroes gain the power needed to defeat him. This requires a certain amount of Villainous Valor, and if played correctly, it may shift the audience's sympathy a bit more toward him.

Unlike a Last Breath Bullet, the villain is still very much alive. However, this can still lead to Taking You with Me. Compare with Last Stand, where it's the heroes who are the ones making the desperate play. May be a form of Villainous Valour if the villain could easily escape but instead chooses to be noble and fight to the last. Contrast with Villain: Exit, Stage Left, where the villain flees instead of staying to fight to the end.