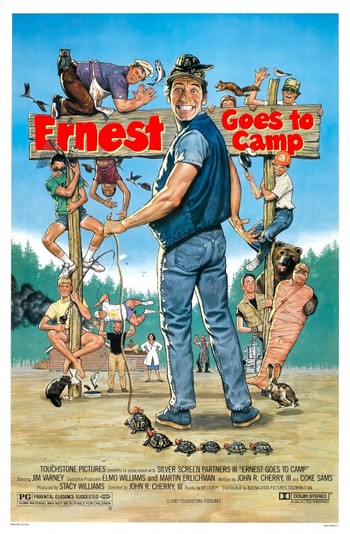 Know what I mean?
A family comedy from 1987, Ernest Goes to Camp is the first of the Ernest P. Worrell series of movies. It introduced the Ernest character onto the big screennote Although it wasn't the first Ernest movie to be filmed. The character had appeared a year earlier in an obscure movie called 'Dr. Otto and the Riddle of the Gloom Beam', which sat in the can until 1992. and launched the movie career of the late Jim Varney.
Advertisement:

Ernest is a handyman at Camp Kikakee who wants to become a camp counselor, but his clumsiness and absent-mindedness keep getting in the way. Eventually, he is put in charge of a group of juvenile delinquents whom no one else wants to tolerate, and he wins their begrudging respect with the help of the camp's owner, Chief Saint Cloud, and his granddaughter, the camp nurse.

The camp's future is in danger, however, when an unscrupulous mining corporation discovers that the camp sits on top of a rare mineral deposit. Using the unwitting Ernest as a proxy, they trick the Chief into signing over the deed to the land. Can Ernest and his Ragtag Bunch of Misfits successfully save the camp from destruction?