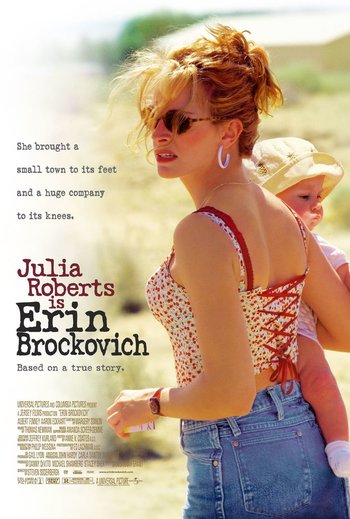 Erin Brockovich is a 2000 film directed by Steven Soderbergh and starring Julia Roberts in the title role.

Erin Brockovich (Roberts) is a single mother without a job and with thousands of dollars in hospital bills from a car accident she was in (and unsuccessfully sued the other driver to pay). Desperate, she persuades her lawyer Edward L. Masry (Albert Finney) to take her on as a legal assistant. While everyone else is very professional, Brockovich dresses trashily and is rather crude. Then one day, she begins to investigate the Pacific Gas & Electric Company and discovers they're dumping toxic waste into the water supply of Hinkley, California (about 125 miles northwest of Los Angeles by Interstate). By using her... considerable assets... she begins a legal battle that would end up the largest class action lawsuit in American history. Yes, this is Based on a True Story, and Erin Brockovich is a real woman. She gets a cameo as a waitress in a Greasy Spoon restaurant (and, in a cute little bit of irony, her name tag reads "Julia").