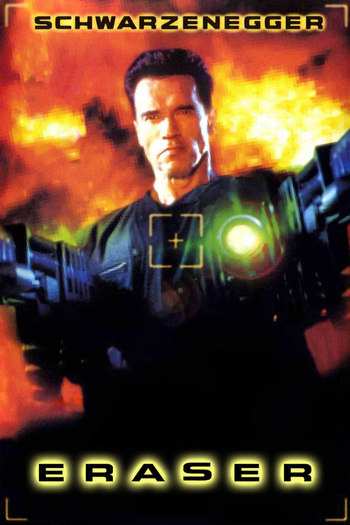 The main story concerns Cyrez Corporation, a company that creates and manufactures weapons for the United States military. A senior executive, Dr. Lee Cullen (Williams), discovers that their latest magnetic acceleration rifle (personal railgun), the EM-1, is going to be sold to Sergei Ivanovich Petrofsky (Olek Krupa), a well-known terrorist. In the hands of terrorists, the weapon would make them unstoppable, as it fires aluminum shells through solid objects and relativistic speeds, i.e. it is far more powerful than any other man-portable weapon in the world. So, Lee copies the evidence to two discs. One for the FBI, one to go public. She spends too much time in an area she wasn't supposed to be, and her superiors soon find out her plans.

Cue John Kruger (Schwarzenegger), an ace agent of the Federal Witness Security Protection Program (WITSEC). He has been nicknamed "Eraser" for his ability to erase any trace of the people he is protecting. Now he has to protect Lee. But there are dangers ahead. The conspiracy extends further than Cyrez itself, involving even Daniel Harper (Andy Romano), Undersecretary of Defense. Kruger has been warned by his mentor Robert DeGuerin (Caan), that there is a mole within the Program, responsible for the deaths of key witnesses in top-level cases. Lee could be next.

Good advice. Too bad DeGuerin is The Mole and has been hired to kill both Lee and anyone actually trying to protect her. Now Kruger must "erase" his opponents in a decidedly more lethal style.

A remake of the movie titled Eraser: Reborn is set for release to DVD, Blu-ray, and Digital on June 7, 2022, and will also be available for streaming on HBO Max in Fall of the same year.