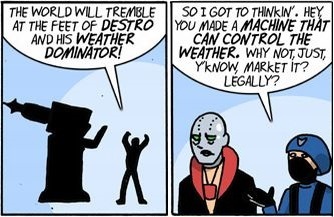 "If you hate G.I. Joe that much, you can still use the money to ruin them and still have some left, but I guess you never noticed th—"
"I once heard somebody — I think it was Batman — say that criminals are a cowardly, superstitious lot. Let me just add that costumed ones are not all that bright either. Take Dr. Alchemy. If you had a so-called Philosopher's Stone that transmuted anything you wanted into anything else, would you put on a costume, steal something and then defy the cops to take you in? Granted, the stuff changes back if you put the stone down but, still — is there anyone here who can't think of about a dozen ways to make a million with such a stone?"
— Mark Shaw, Manhunter #7
Advertisement:

When a person is pursuing a goal, especially if it's something tempting like wealth, fame, or political power, there may come a time when they have to choose between doing what's easy and doing what's right. At that moment the legitimate method of earning it may be slow, difficult, or unprofitable, while at the same time there's an illegal or unethical option that offers quicker gains to whoever can get away with it. On the other hand, assuming that the shady option is always the most expedient is a mistake that leaves a lot of would-be villains not only punished, but broke as well. They may think they're acting in their own interest, but often they screw themselves over because they don't realize that they could have done better—or at least reduced the risk of being caught and defeated by the heroes—by using more honest means.

This is the villainous equivalent of Reed Richards Is Useless: A baddie who constantly fails at beating the heroes never realizes their intellect and hard work might mean they'd get a lot more done if they did an honest day's work; any attempt at going straight is simply a ruse to lull heroes into a false sense of security. This may be more a factor of maintaining the Status Quo, and it's usually mentioned that the Mad Scientist is mad after all. Sometimes lampshaded at a villain's death with "If only he'd used his powers for good, instead of for evil." The example is contagious; even if The Government gets a hold of secondhand ultratech, they just use it for ill-conceived attempts to either conquer other nations or abuse their citizens.

Sometimes this trope is subverted by villains who start out using their talents for legitimate gain, but who end up becoming villains for one reason or another. Sometimes a Mad Scientist villain does market his inventions, but only to finance grander schemes and sometimes remarks, "How do you think I got all my equipment without attracting attention?" Another subversion can be when the villain really does go straight, and is able to use the skills he demonstrated in his criminal career to land a legitimate job. Compare Reluctant Mad Scientist. Rich Boredom may justify it because the character already is swimming in money and is seeking something else.

This trope was very common in the early days of comic book superheroes like The Golden Age of Comic Books and The Silver Age of Comic Books. As the decades passed villains became more complex but the trope is still around in some form. When this is avoided, the turn to the side of good is usually planned well in advance. Heroes may even precipitate it by simply asking "And Then What?".

This trope could almost be a case of Reality Is Unrealistic. For all the criticisms thrown at comic book supervillains, quite a few real-life criminals make this trope Truth in Television, due to the difficulty of those with criminal records getting honest work. It was common practice of (legal) casinos in Las Vegas - and later Atlantic City - to hire men who (successfully) ran illegal gambling operations in other parts of the country because these people had specialized skills and experience in the gambling trade. And even now, casinos sometimes hire known cheaters to catch other cheaters, because they know all the tricks.

Finally, there's also the Logical Fallacy that seems to assume that because someone manages to invent some sort of amazing new product, they will also automatically be successful at marketing it. Just because someone has the science smarts to develop something brilliant doesn't necessarily mean that they also have the business smarts to sell it effectively... and if you try and sell your product to a business, there's always the danger of a Corrupt Corporate Executive cheating you out of your rightful share of the profits. Indeed, many villains' Start of Darkness is kicked off by such failures in such legitimate or even good uses of their talents, and for villains trying to go straight is often the primary method of ensuring that they don't.

See also Fake–Real Turn, where a business that is serving as a front operation for a criminal activity or organization becomes so successful in its own right that characters decide to pursue it as a legitimate business. And You Could Have Used Your Powers for Good!. Compare Moral Pragmatist.

A subtrope of Misapplied Phlebotinum, with a degree of Stupid Evil. Compare Reed Richards Is Useless, Screw the Rules, I Have Supernatural Powers!, and Dick Dastardly Stops to Cheat. Contrast Rich Genius, Visionary Villain, and Pragmatic Villainy. See also Science-Related Memetic Disorder and Sanity Has Advantages for the possible justifications of this trope. Can end up leading to Boxed Crook when put into practice.

"But why become criminal?"

Dr. No explains why he chose to use his intellect to work for the criminal conglomerate SPECTRE instead of for the West.

"But why become criminal?"

Dr. No explains why he chose to use his intellect to work for the criminal conglomerate SPECTRE instead of for the West.