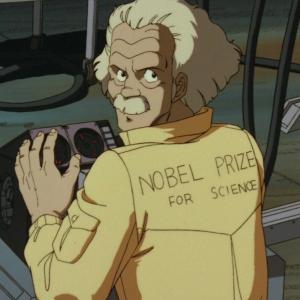 A proud recipient of the Nobel Prize For Science!, wearing the award's highly prized goldenrod jacket!
December 10, 2017: Sir Peter Weyland is honored with the Nobel Peace prize in Science for his extraordinary atmospheric work over the polar ice cap.
— Weyland Industries Timeline

People just love handing out awards to each other. Whether it's a merit badge, an honorary degree, or a knighthood, giving someone an award simultaneously tells them, and everyone else, that they've done well. Many of the most famous and prestigious awards have become bywords for the highest achievement in the relevant field, or even in any field. If a fictional character gets an Oscar, Pulitzer or Nobel Prize, you know they must have done something awesome.

Unfortunately, sometimes authors use such awards for name value, without worrying about using them correctly. At the mildest end of the scale, a work will make changes that seem plausible for a parallel universe or future time line, like adding a fictional category to a real award (a Nobel Prize in music or computing, for instance). More severe cases of factual inaccuracy will give an award to someone who would be ineligible, or mess up the award's name. The most obvious examples will give out horrible mismatches of real awards, for all the wrong reasons, in a supposedly realistic or historical setting.

Such an award could be the only proof that a character is good at something. Has nothing to do with giving people awards for taking the biggest artistic liberties. For characters in fiction receiving real-life awards, see Real Award, Fictional Character. See also the Awards Index.