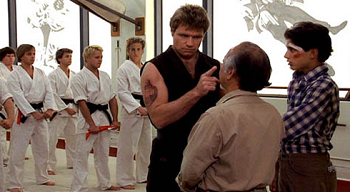 "Strike first! Strike hard! No mercy!"
"I'm not positive, but I think Bas Rutten has made the first self-defense instructional video for the bad guy. Which is troubling news because it's much, much better than the ones for the good guy. So I guess the only thing I've learned is that when a bar fight ever breaks out, you're going to die. And if Bas Rutten ever breaks out, we're all going to die."
— Seanbaby, "5 Insane Fighting Manuals (You Probably Shouldn't Listen to)"

Where the Arrogant Kung-Fu Guy learns martial arts, possibly through a Sensei for Scoundrels and very likely an Evil Mentor.

"Welcome to Poison Snake Way, where we practice real martial arts! None of that sissy stuff like questing for enlightenment or martial pacifism here. What we teach you is how to brutally destroy anyone and everyone who stands in your way. Inner peace? That's for losers. Here, you'll learn how to rip anyone who pisses you off apart, until they're able only to scream for mercy through their broken teeth and bloodied lips, while they stare in horror at your foot coming down on their face over and over again."

While the Thug Dojo may be effective in producing proficient martial artists, what it is also producing is thugs and bullies who mercilessly pummel anyone weaker than them. Unlike most Real Life Eastern martial-arts schools, which discourage the use of martial arts in anything other than self-defense or fair competition and expect their students to never raise their fists in anger, a Thug Dojo enthusiastically endorses the use of extreme physical violence on anyone, anywhere, for any reason. While in a competition, expect them to use prohibited moves including Groin Attacks, and training methods that would fit in nicely with Training from Hell, The Spartan Way and Teach Him Anger to get results.

In Real Life, such conduct can get the dojo in trouble with the cops... except in the worst-case scenario, where the Thug Dojo is for the cops.note It would, however, definitely get their sensei in trouble with anyone personally connected to a paying customer.

In works with Rival Dojos, the one that is the heroes' most serious enemy will usually be one of these. See also Deceptive Disciple, who may open one of these after leaving a more-upstanding mentor. The Defector from Decadence may be a dropout from here. Compare Opposing Sports Team and Academy of Evil.