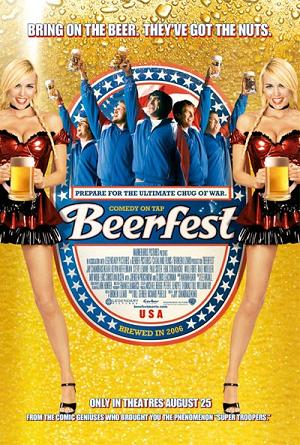 Beerfest is a 2006 film from comedy troupe Broken Lizard. It's probably best described as an Affectionate Parody of sports movies that uses cultural and National Stereotypes to a ridiculous extent.
Advertisement:

The plot of the movie revolves around brothers Jan and Todd Wolfhouse, whose German grandfather has just passed away. Charged with the task of bringing his ashes to the "family resting place" in Munich during Oktoberfest, they end up discovering Beerfest, a secret underground drinking competition. Beerfest is presided over by Baron Wolfgang von Wolfhausen, braumeister of the Von Wolfhausen brewery. He is furious at Jan and Todd's late grandfather for purportedly stealing his family's beer recipe, "the greatest in all the world," calling him a "thieving stable boy" and "bastard son of a whore." Americans are banned from Beerfest, and as Jan and Todd try to state their right to be there, they are handily beaten in an impromptu speed chug competition by the German team. After suffering humiliation at the hands of the von Wolfhausens, they return home with the intent to return to Beerfest with the first American team—and kick the Germans' asses.