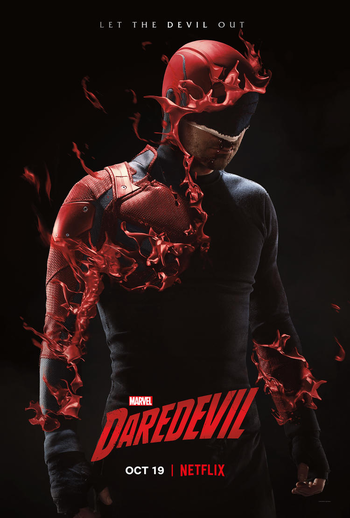 Justice is blind.
"I'm not seeking penance for what I've done, Father. I'm asking for forgiveness... for what I'm about to do."
— Matt Murdock
Advertisement:

Daredevil is an original series adaptation of the long-running comic book series, and the first entry in the Marvel Cinematic Universe's The Defenders franchise, followed up by Jessica Jones, Luke Cage, Iron Fist and The Punisher. The series originally premiered on Netflix in 2015.

The show follows Matt Murdock (Charlie Cox), a blind lawyer with heightened senses, as he works alongside his girlfriend Karen Page (Deborah Ann Woll) and his best friend and law partner Foggy Nelson (Elden Henson) to fight the criminal activities of Wilson Fisk (Vincent D'Onofrio) in the courtroom and on the streets of Hell's Kitchen as the masked vigilante "Daredevil".

Rather fittingly, it was the first Netflix series to receive descriptive audio to enable blind people to follow along properly. It's also notable for being the first MCU property to break from the franchise's overall lighter tone, offering a Darker and Edgier take of the universe that hadn't yet been seen when it debuted in early 2015.

Daredevil was renewed for a second season a week after its debut, which premiered on March 18, 2016. It introduces two major characters from Marvel lore: Frank Castle (Jon Bernthal), and Elektra Natchios (Élodie Yung). The near-unanimous praise for Bernthal's performance as Castle led to him getting his own spinoff show, The Punisher, released on November 17, 2017.

A third season of Daredevil was released on October 19, 2018, and introduces several more characters of Daredevil lore, including Wilson Bethel as Benjamin "Dex" Poindexter, Joanne Whalley as Sister Maggie, and Jay Ali as Ray Nadeem. A month after the third season dropped, Netflix announced they had officially canceled Daredevil, but claimed the character would "live on in future projects for Marvel" after a contractual hiatus.

In 2021, Kevin Feige confirmed that any appearance of Daredevil in a future MCU offering would have Charlie Cox reprising his role as the character

, with Spider-Man: No Way Home ending up being the first of such projects. Only two days before, Vincent D'Onofrio ended up returning as the Kingpin in the penultimate episode of Hawkeye. In February 2022, the series, alongside the rest of the Defenders franchise, exited Netflix's platform, moving to Disney+ the next month. Following the move, rumors of a reboot/continuation under Marvel Studios began to circulate

— until a new series

written by Matt Corman and Chris Ord was confirmed to be in development.

As Daredevil is part of The Defenders, the second season sets up things in The Defenders, and The Defenders influences the plot of Daredevil season 3, spoilers from that series are included in some of the examples, and they are marked as such.

Tropes featured in Daredevil include:

Matt Murdock: I can't do this alone.
Karen Page: You're not alone.