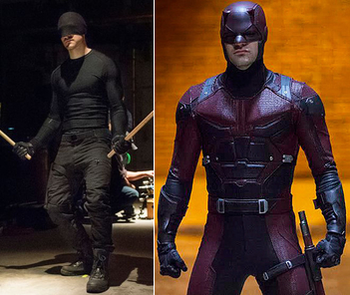 Karen Page: I cannot believe this is the same guy who stopped that Union Allied nut from stabbing me in my apartment! That is a serious upgrade.note Foggy Nelson: I dunno, I think the horns are a bit much.
"Finger himself had said that Batman had been an idea of Bob Kane's, but the original ideas for the character were quite different. He only had a domino mask, red tights, no gloves, and bat-like wings instead of a cape."
— Linkara reviewing "Detective Comics #27,"

the first appearance of Batman
Advertisement:

Often works will show that certain outfits, from Superhero costumes to military uniforms, have some prototype forms before one is finally chosen. The look and utilities will need to be hammered out. There could be practical reasons (the wrong color(s) are used for camouflage), or the reasons could be aesthetic (the early outfit(s) are considered Impossibly Tacky Clothes). Once those issues are solved, the final results may become an Iconic Outfit.

How the costume is developed could involve characters looking at models and sketches while debating the merits of the outfit. Or there could be a montage of the outfits. The latter is more likely to show up when this trope is Played for Laughs.

Often the unfinished outfits will vary wildly from the final design, and each other, even when they all have a common element.

These even apply to character designs when a work is being planned, as a form of What Could Have Been.

A Sister Trope to Costume Evolution (finished costumes still change over time), Costume-Test Montage (when different clothes are tried on, but are usually finished clothes). Often, when a long-running series gets rebooted or adapted to a different medium, a costume or costumes from earlier eras might be used as the Beta Outfit(s) as a Mythology Gag.

See also Cheap Costume (a barely working outfit is thrown on at the last minute). It may intersect with an Early Installment Weirdness, when it's the creators the ones hammering out a design used in the pilot or first episodes.

Not to be confused with Your Costume Needs Work (when a proper costume is mistaken for Cosplay).