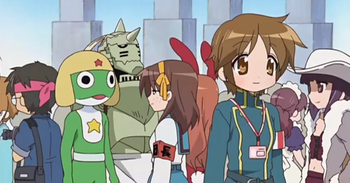 Too bad this isn't a Massive Multiplayer Crossover.
"Now ostensibly, cosplay means people who dress up as their favorite characters from film and television and especially anime, but it is so much more than that. These aren't just people who find a costume and put it on — They bend them to their will. We are, all of us, injecting ourselves into a narrative that meant something to us. And we're making it our own. We're connecting with something important inside of us. And the costumes are how we reveal ourselves to each other."
— Adam Savage

Cosplay is a Portmanteau of the words "costume play". It refers to the fan hobby of making costumes of a concept or person and wearing them at fan gatherings, though is commonly associated with fictional characters from mediums such as anime, TV, movies, comics, video games, etc. At anime conventions, cosplay is one of the most popular events, and to some people, it is Serious Business. Don't even think about trying to get them to wear the Official Cosplay Gear. They will often wear a Sexy Whatever Outfit though.

If it's a character getting cosplayers in the same universe, the actual character might get told Your Costume Needs Work. This can even happen to celebrities in Real Life.

Miia and Rachnera dressing up as Solid Snake and The Boss respectively with Suu as a cardboard box.

Miia and Rachnera dressing up as Solid Snake and The Boss respectively with Suu as a cardboard box.