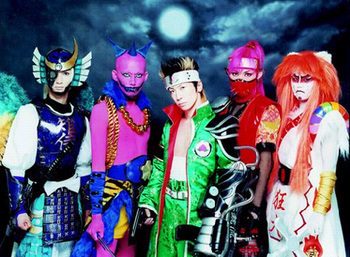 Psycho le Cému (also known as PLC) is a Japanese Visual Kei band born in the end of The '90s and being most famous in the Turn of the Millennium. This band enters into Visual Shock classification, but different from other bands, this one uses Cosplay as their main inspiration, basing on external references of Pop Culture, like anime and video games, but also taking ideas from Super Sentai, Western Fairy Tales and a classic in Asian literature.

The group was formed in 1999 releasing a demo album in the same year. In 2000 released Kronos and Risokyu Ryokou Guide Disc, their first maxi-singles and later their first album in 2001, Doppelganger, all signed by the indie label Limited Records. Then in 2003 Psycho le Cému signed with Nippon Crown getting a big impact in Japan and releasing two albums: Frontiers and Beautiful World and a lot of singles. But the success overpassed this country and became a big hit in the USA, mostly because of the Cosplay, being invited to big events in that country like Pacific Media Expo, Project A-kon, Katsucon and Megacon between 2004 and 2005.

But the fame has a price. In 2005, Daishi was found guilty of being positive for methamphetamine, was arrested by Kanagawa police and jailed for a year and half. The news was so shocking in Japan that all PLC albums and merchandising were confiscated and the group went into a hiatus until Daishi went out of the jail. After that, in 2006 the group recorded for a last time releasing their last album, Epilogue, and compiled the Greatest Hits Album Psycho le Cému Best. Then, the group had a breakup and all their members went for their side projects "Dacco" (YURA-sama and Lida) and "Mix Speakers Inc." (Aya and Seek), as well Daishi went into a solo carrer.

The End... Or Is It? Well, certainly not. In 2009, Psycho le Cému reunited again with new costumes and a tour celebrating the tenth anniversary of the creation of the group with a concert tour called Psycho le Cému 10th Anniversary - Legend of Sword. And again they did it in 2014 with the 15th anniversary. But this time the group reunited for real, making more costumes, more new songs and the first album since the last one they did in 2006: NOW AND THEN ~THE WORLD~, released in August 2016 in their new label, noneless than Warner Music Japan. And the Adventure Continues...

Psycho le Cému has their website back, just called as PsychoLeCemu.com

(all in Japanese, sadly). Not to mention the article of the group in The Other Wiki

(offline, archived in Wayback Machine) that compiled PLC works before the breakup.

Being a group that feeds with Cosplay, there're SO MANY external references that a Shout-Out section was made exclusively for Psycho le Cému.