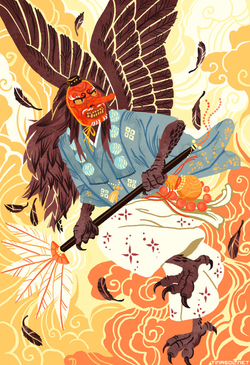 The word tengu literally means "heavenly dog," but the tengu is most often thought of as a sort of mountain goblin, sometimes depicted as being crow-like in appearance, sometimes depicted with a red face and elongated nose. Historically, the tengu was often linked (negatively) with esoteric Buddhism and yamabushi (mountain ascetic) practices. Tengu are also held responsible for so-called kami-kakushi phenomena, in which they abduct a person (usually a young child) for several days or weeks.
— Pandemonium and Parade: Japanese Monsters and the Culture of Yokai
Advertisement:

Tengu (literally "sky dog") are a type of Youkai found in Japanese Mythology that are most commonly associated with crows, known for their great agility, magical power and arrogance.note To the point where in Japanese a conceited person can be described as "turning into a tengu", based on a common fate for such people in legend. Old stories portray tengu as The Trickster and/or Evil Mentors who lure Buddhists into depravity, but gradually they were reinterpreted into simply dangerous, territorial beings which are capable of nobility in their own right.

As with most legendary creatures from ancient myth, there is a certain amount of variation in how they are depicted. The earliest depictions, often called Karasu Tengu (Crow Tengu), are depicted as anthropomorphic crows with a fully bird-like head and beak. Later depictions, known as Hanataka Tengu (Long-nosed Tengu), instead resemble humans with red skin and comically-long noses, who may or may not have crow wings. Sometimes both types exist at once in a caste system, with the long-nosed and occasionally giant Dai Tengu (Great Tengu) ruling over the avian Ko Tengu (Lesser Tengu).

More obscure, regional tengu variants include the Guhin (Dog Guest) which have aspects of either trees or canines, the Kawa Tengu (River Tengu) which live underwater and can create Faux Flame, and the Shiba Tengu (Lawn Tengu) which are essentially Kappa by another name.

In modern fiction (particularly when they're main characters) they might simply be Winged Humanoids who otherwise look like ordinary people; likewise their large nose or beak is sometimes depicted as part of a mask rather than an integral part of their own anatomy.

Tengu are often depicted as mountain-dwelling and are associated with martial arts, sometimes being cited as the origins of Secret Arts such as Ninja techniques. They are particularly identified with yamabushi

, the mountain-dwelling monks of the Shugendo religion, and are often depicted wearing the yamabushi's traditional costume (depending on the story this may be a disguise, a show of religious devotion, or the original clothing that yamabushi garb was based on). Other common features include long white hair, "tengu geta"note Wooden sandals (geta) with one unusually tall slat rather than two, requiring superhuman balance to walk in. and large fans made of feathers or yatsude leaves.

The name tengu is derived from the Chinese tiangou

(which share the same Chinese characters), although the tiangou is simply a magical dog with no human features.

"A monster with a distinctive tail. While it is omnivorous, it has a preference for fruit, and keeps various fruits with all kinds of effects in its belly pouch. An incredibly curious beast, it enjoys playing tricks on people, and has been seen to bat fruit at its prey using its tail."

"A monster with a distinctive tail. While it is omnivorous, it has a preference for fruit, and keeps various fruits with all kinds of effects in its belly pouch. An incredibly curious beast, it enjoys playing tricks on people, and has been seen to bat fruit at its prey using its tail."