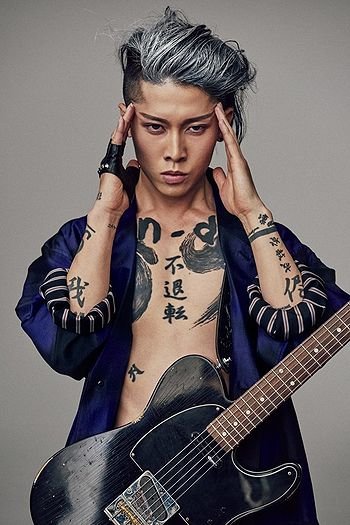 The artist as of 2017.
Influences:
Miyavi (stylized sometimes as 雅-miyavi-) (Japanese: 雅) (born Takamasa Ishihara on September 14th, 1981 — Japanese: 石原 貴雅 Korean: 이기아), also known as Miyavi Lee Ishihara, is a Japanese musician, actor, and businessman. Born in the Konohana-ku ward of Osaka City in the Osaka Prefecture of Japan, Miyavi originally grew up wanting to become a soccer player before seriously injuring his knee as a teenager. During a deep depression after his injury, a friend gave him a guitar to cheer him up, which he began to learn to play while recovering. Realizing he genuinely enjoyed the guitar and had a fondness for rock music, he moved to Tokyo in 1999 at the age of seventeen to start a music career.
Advertisement:

Joining the already established Visual Kei band Dué le Quartz in the summer of 1999 as a guitarist and backing vocalist under the stage name Miyabi, the band achieved indie success within the visual kei scene, releasing four albums, six singles, and nine videos until the band's disbandment in 2002. After the disbandment, he changed his name to Miyavi and remained signed with Dué le Quartz's record label PS Company as a solo artist, releasing his first album Gagaku in 2002 and the singles "Shindemo Boogie-Woogie", "Pop is dead" and "Jingle Bell." His first major album, Miyavizm, was released in 2005, peaking in the top ten of the Oricon charts, and he embarked on his first world tour in 2007. Toward the end of 2006, Miyavi moved to Los Angeles, California for six months to study English and dance, where he would often give free street performances at the Venice Beach boardwalk and Santa Monica Pier.

In 2004, he starred in a fictional quasi-autobiographical film called Oresama, where he travels back in time to Osaka in 1984 and starts a band. Yes, that is the plot of the movie. Ten years later, he was personally selected by Angelina Jolie to play the role of Mutsuhiro Watanabe in the 2014 film Unbroken.

In March 2009, Miyavi married former J-Pop artist Melody Ishikawa (stylized as melody.) in a private ceremony, shortly before his departure from PS Company. Their first child, Lovelie “Aily” Miyavi Ishihara (also known as Aspen), was born in July of that year. and their second child, Jewelie Aoi Ishihara, was born in October 2010. Their third child, Skyler Kakeru Ishihara, was born on February 24, 2021. After moving to America in 2014, he resided between Tokyo and Los Angeles with his wife and two children; following the birth of his son Skyler the family relocated to Tokyo permanently.