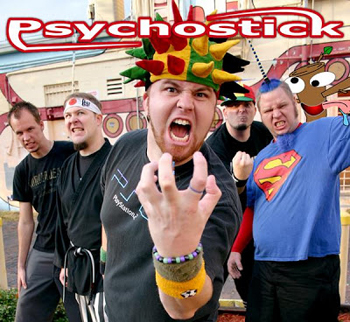 An American comedic Metal band with strong influences from Alternative Metal, Hardcore, Nu Metal and Funk Metal; the band describe their music as "Humorcore". Formed in 2000, they became known to a wider audience in 2006 with the re-release of their 2003 debut album and have released two studio albums, along with two EPs (one of them a Christmas Album), since. They are also distinguished for their use of unusual wigs/hats and costumes, with lead singer Rob's spiked clown hat being the one constant.

Could be considered One of Us, as many of the songs are about nonsense and stupidity in media. Parts of their songs appear in a number of clips in AMV Hell, for which they are particularly well suited.