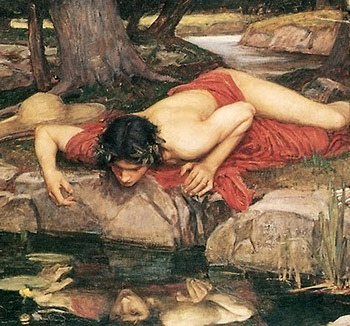 If looks could kill.
"You talk about the people as though you owned them, as though they belong to you... You don't care about anything except you. You just want to persuade people that you love 'em so much that they ought to love you back. Only you want love on your own terms. Something to be played your way, according to your rules."
— Jedediah Leland to Charles Foster Kane, Citizen Kane
Advertisement:

The narcissist appears to be literally in love with themselves, presents themselves as perfect, and expects you to agree. When these expectations are not met, they react with indignation and hostility towards those who dare deny them that to which they feel entitled. Moreover, while highly self-conscious of how others view them, they are generally indifferent to the harm that they cause others in furtherance of their goals.

The Trope Namer is Narcissus of Classical Mythology. The best-known version of the story is from Ovid (in The Metamorphoses), according to which Narcissus coldly turned down a beautiful woman named Echo, who as a result faded away to nothing but a literal echo. Angered by his callousness and vanity, Aphrodite cursed Narcissus to fall in unrequited love with the next person he saw — which was his own reflection in the river, which he did until he died, whereupon his body was transformed into a flower. This is a perfect (if minimalist) description of the conflict within the narcissist — somebody who loves themselves, but at the same time never feels loved by themselves. Thus, they try to fill this hole with the love of others. Real Life Narcissists often have rather fragile egos when things do go wrong for them, and they may well do so since the Narcissist is rarely as clever, talented, or charming as they think they are.

It is insufficient for a character to simply be extremely vain or excessively preoccupied with their selfish desires to qualify for this trope. Rather, ALL of the following requirements must be met in order to qualify.

A common characteristic of an Alpha Bitch, Bridezilla, The Bully, The Fighting Narcissist, Jerk Jock, My Beloved Smother, Pointy-Haired Boss, The Prima Donna, Selfie Fiend, Spoiled Brat, or a Stepford Smiler. Particularly sinister and dangerous examples often include the aforementioned clinical/true sociopaths, The Social Darwinist, Übermensch, and General Ripper. The most absolute extreme of this trope is in the phrase "A God Am I": psychotic megalomaniacs who consider themselves divine and destined to subjugate everyone and everything to their will.

Compare Small Name, Big Ego; Inferiority Superiority Complex; and Black-and-White Insanity. Compare and contrast The Sociopath, who often displays extreme self-centeredness and vanity (though not always to the same extent a narcissist would), with an insatiable craving for stimulation, a complete lack of conscience, as well as an inability and unwillingness to form any emotional bonds with those around them.