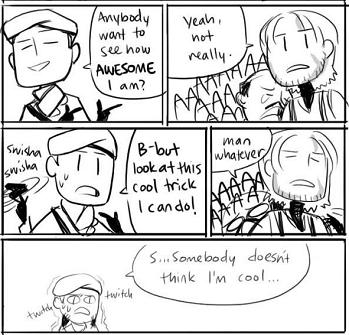 Ocelot doesn't exactly have the best self-esteem.
"'Cause I feel like I'm the worst,
So I always act like I'm the best"
— Marina Diamandis, "Oh No!"
Advertisement:

Sometimes, it turns out a character who seems to think the world of themselves actually doesn't; their high-and-mighty attitude hides crippling insecurity. They're often eager, even desperate, to prove themselves, and they won't take it well if their attempt fails. Often, the reason for their insecurity is because they have such a high opinion of themselves that they can't deal with any kind of perceived failure or rejection, bringing the whole thing into a large and angry circle.

Commonly they'll try to feel more secure by putting others down. If they go through a Break the Haughty situation, expect it to have shades of Break the Cutie, as this character is almost always a Jerkass Woobie.

May be a trait of the Broken Ace and Beta Test Baddie or show up in deconstructions of the Alpha Bitch, Jerk Jock, Bratty Half-Pint, Smug Snake, Smug Super, Insufferable Genius, Arrogant Kungfu Guy, Small Name, Big Ego, or even A God Am I (i.e straight superiority complex). Compare Sad Clown, someone who masks their insecurities with humor rather than arrogance. Contrast with Heroic Self-Deprecation, where the person is in fact awesome but the person themselves doesn't believe that they are worth much. Might also overlap with Easily Embarrassed Youngster if they're under 18.

A subtrope to the sin of Pride.