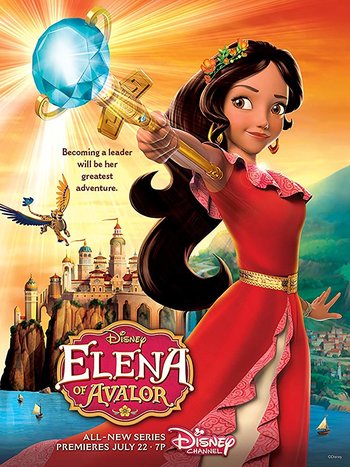 Every legend begins with someone special.
Bienvenida, Princess Elena.
Advertisement:

Elena of Avalor is a 2016 CGI-animated Disney Junior/Disney Channel spinoff of Sofia the First, created by Craig Gerber. The series premiered on Disney Junior on July 14, 2016 and Disney Channel on July 22, 2016, with its pilot film airing on November 20, 2016. Elena was introduced as Disney's first Latin-American bilingual princess.

In the faraway kingdom of Avalor, Princess Elena was the firstborn daughter of King Raul and Queen Lucia. One day, everything changed when an evil witch named Shuriki invaded Avalor and took the lives of her parents in a coup to claim the throne for herself. To protect the remaining members of the royal family, the Royal Sorcerer, Alacazar, magically sealed away Elena's grandparents and younger sister, Isabel, into a painting. To buy time for his spell, Elena confronted Shuriki, ready to give up her life for her family... only to be protected by the magical amulet her mother gave her for her sixteenth birthday, but at the cost of Elena being imprisoned in the amulet. Alacazar fled Avalor with the amulet in search of a way to free Elena, Avalor's last hope of freedom.

All seemed lost... until the amulet fell into the ownership of Princess Sofia of Enchancia, who would at last free the missing Princess of Avalor after forty-one years of imprisonment. With the kingdom restored to the rightful heirs, all seemed well. Though eager to take the throne herself, she's still young enough that she needs some guidance from her royal council: her grandparents, Francisco and Luisa, her cousin, Chancellor Esteban, and her new friend, Naomi, along with the help of her new friends, Alacazar's grandson and successor, Mateo, and a new member of the Royal Guard, Gabe, as well as the native jaquins.

The show was renewed for a second season a few weeks after its premiere in 2017, and was renewed for a third season, which premiered in 2019. It was confirmed Season 3 will be the show's last, with the final episode featuring Elena's coronation having premiered August 23, 2020.

In spite of Elena's status as a Disney Princess, references to the show in other Disney media are scarce. Elena is available in the Disney Tsum Tsum mobile game.

Elena of Avalor is also available for streaming on Disney+.

Elena of Avalor contains examples of:

Esteban risks his own life for the sake of Elena.

Fit To Be Queen

You Can't Catch Me

The Gift of Night

Esteban risks his own life for the sake of Elena.

Fit To Be Queen

You Can't Catch Me

The Gift of Night