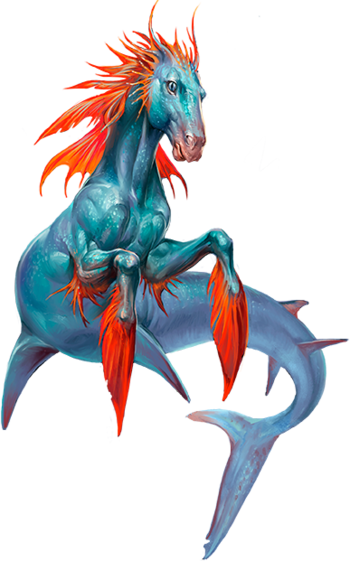 "Who are you calling 'seahorse'?"
Advertisement:

You take the front half of a horse and the back half of a fish and that's a hippocamp(us); a merhorse, so to say. It is also known as a hydrippus, a sea horse, and a water horse, but those last two terms have other meanings too. Although not as popular as pegasi, unicorns, and centaurs, hippocamps have been around for just as long. What makes the difference is that for most of history, hippocamps had a presence in art only and never got any legends attached to them.

The oldest known depictions of hippocamps are from 4th Century BC Phoenicia and the creature was known around the Mediterranean, making its way to modern times through Classical Mythology. Horses were imagined as the creation of the sea god Poseidon, who'd either ride on them or have them pull his shell chariot over the waves. Several sources describe four-legged horses, but more often they're depicted as hippocamps. Hippocamps are a favored mount among the rest of the sea deity crowd too. Classical art regularly gives the creature wings. These may be taken literal, but also symbolical because wings may signify speed instead of actual flight. Most modern-day depictions omit the wings or turn them into fins. Different depictions may alter how much the fish and horse parts blend into each other; some may have purely equine front halves and fishlike tails, but others may give hippocamps flippers or webbed claws instead of hooves or long fins instead of manes.

The aforementioned term "water horse" is a catch-all for water spirits of equine form, whether permanent or part of the time, such as the Scottish kelpie. Most are part of North-West European folklore and none are hippocamps as defined by Classical Mythology, but they may be depicted in the form of a hippocamp.

Due to their mythological origins, hippocamps are commonly found in settings or regions associated with the Mediterranean, fantasy stand-ins thereof, Greco-Roman myth, Lords of the Ocean, Atlantis when presented as an undersea city, and mermaids in general.

"Seahorse", of course, is the name of a real-life fish, and to keep things confusing its genus name is Hippocampus. If seahorses and hippocamps show up in the same story, they're either the same sort of thing or the seahorse will be on the person end of things and the hippocamp on the animal end of things.

For the record, "hippocamp" is shortened from "hippocampus", which is a Latinified combination of "hippos" and "kampos". The former means "horse" and the latter "sea monster (in the sense of something with a long, flexible tail)". "Hydrippus" is a Latinified combination of "hydros" and "hippos". The former means "water" and the latter, as said before, "horse". Modern works typically use the Latinized hippocampus/hippocampi, Anglicize it into hippocamp/hippocamps, or simply translate it directly into "sea horse" or "water horse".

A Sub-Trope of Cool Horse and Our Mermaids Are Different. A Sister Trope to Seahorse Steed, Seahorses Are Dragons, and Dolphins, Dolphins Everywhere. Compare to Our Kelpies Are Different for another kind of water horse. Combine it with centaurs and you get ichthyocentaurs, which go on Our Centaurs Are Different. The hippocamp has no connection to any Brain Monster whatsoever.