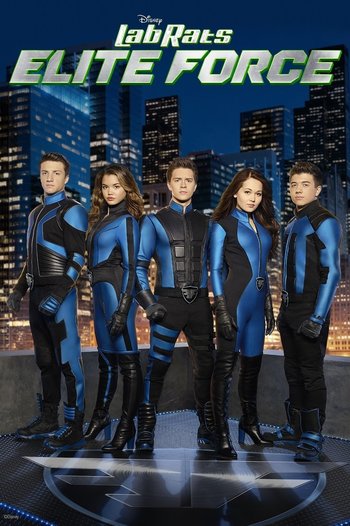 Lab Rats: Elite Force is a Spin-Off Crossover Series to Lab Rats and Mighty Med in Disney XD. After the bionic students received an upgrade, there would be no need to train them anymore. Adam and Leo opted to stay behind at the Bionic Academy while Chase (Billy Unger)note Now professionally credited as William Brent and Bree (Kelli Berglund) left with Donald Davenport for a new mission. They run into old friends, Kaz (Bradley Steven Perry), Oliver (Jake Short) and Skylar Storm (Paris Berelc), all of whom came to Davenport because Mighty Med was destroyed by dangerous, unknown villains. Davenport came up with the idea to create an Elite Force, a new team that brings together bionic heroes and superheroes to defend the Earth. Along the way, Kaz and Oliver must learn how to use their new superpowers as they face new threats.
Advertisement:

According to a tweet from actress Kelli Berglund, the series would not be returning for a second season. The series finale aired on October 22, 2016, ending the series on a cliffhanger.

Warning: Spoilers from the events of Lab Rats and Mighty Med will be left unmarked.