Series / Land of the Giants 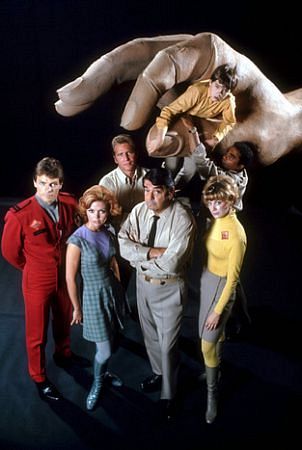 Land of the Giants (1968-1970) was an Irwin Allen science fiction TV series that can be summarized as the inverse of both Gulliver's Travels note Gulliver did travel to a land of giants called Brobdingnag in his second voyage; however, Popcultural Osmosis rarely mentions any parts of the book other than Lilliput. and Incredible Shrinking Man. In the near-future (year 1983), a commercial suborbital spacecraft enters a spacewarp and is transported to a world where the people on that world are all seventy feet tall, a skyscraper is two miles high, and when they're found out, the government wants them for scientific research.

This crew must make their way in a world where fatal hazards abound; a tarantula is the size of a wolf, a kitchen table requires mountain climbing gear (string and a giant safety pin) and making a phone call means using a phone the size of a wardrobe closet.

Not only that, the equivalent of Inspector Gerard sees them as seven Richard Kimbles, with the government offering a substantial reward for the capture of any of the little people as they are called. They end up on a series of adventures, often helping people out of jams that they get into.