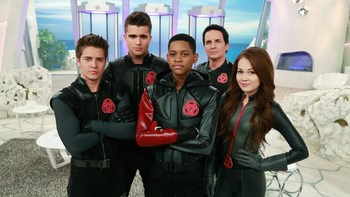 From left to right: Chase, Adam, Leo, Donald and Bree.
Narrator: The world's first bionic superhumans. They're stronger then us. Faster. Smarter. The next generation of the human race is...
Leo: ...Living in my basement?!note ...Living on a bionic island. (in season 4)
— Opening Narration
Advertisement:

Lab Rats is a Science Fiction Kid Com that airs on Disney XD.

When 14-year-old Leo (Tyrel Jackson Williams) moves in with his new stepdad, Donald Davenport (Hal Sparks), he snoops around Donald's mansion and discovers Adam (Spencer Boldman), Bree (Kelli Berglund), and Chase (Billy Unger) — three bionic siblings (each equipped with hi-tech apps) living in a lab beneath the house. An unlikely friendship develops as he sneaks them out to school for their first taste of freedom while they help him to become the most popular kid in school. But when their bionic glitches go off, things get chaotic very quickly!

Ever since Lab Rats premiered, it has been Disney XD's top-rated live-action series. For its fourth season, the series underwent a Retool with the main cast now mentoring other bionic teens at Davenport Bionic Academy, an artificial island (also earning it the new subtitle Bionic Island).

The series ran for four seasons from 2012 to 2016 with its final episode, the two-parter The Vanishing, having aired on February 3, 2016. In addition to several Red Skies Crossover and Cross Through links with other Disney XD series, it was announced in September 2015 that both Lab Rats and Mighty Med would be replaced by a permanent crossover series called Lab Rats: Elite Force which ran for one season.

Unrelated to the BBC sitcom of the same name.

All spoilers are unmarked. Any spoilers relating to the spin-off will be spoiler tagged if necessary.

Just a furry orange ball is the best gift any kid would want for Christmas?

Just a furry orange ball is the best gift any kid would want for Christmas?